At first glance you can tell this truck is owned by someone who vocally supports the military or first responders, or who simply loves his country and wants to show off some American pride. Not only does this 2015 Ford F350 6.7L King Ranch Edition’s owner fit all of those categories, but he also serves in our armed forces.

Originally from Ocala, Fla., Goose Bellows has served for seven years to date in the U.S. Air Force where he was a B-52 bomber crew chief for six years. He’s now a remotely piloted aircraft (RPA) sensor operator on MQ-9 Reapers and still spends much of his time away from home. Goose is also a seasoned builder of custom vehicles; he has built a 1996 Ford Bronco as well as a 2015 Can-Am Maverick with massive undercarriages.

“Also, my wife is actually serving in the Army and I’m building her a new-body-style Ford Ranger,” he says. “I also plan to build a 1994 Ford Bronco Centurion. My goal is to build it for SEMA, going full tilt on it.”

He purchased his 2015 Super Duty, named Buckin’ King, in August of 2018 in Dallas, Texas, just two days after returning from an overseas deployment. He has come a long way with it, as very little was done to it when he purchased it.

“When I acquired the truck, it was practically stock, aside from having a Ranch Hand front bumper,” he says. “The truck needed some tender loving care to bring it to glory and I had just the plan for it. It was actually believed to have been an oil field consultant’s truck.”

In the two years since purchasing Buckin’ King, Goose has completely transformed the look of the truck to the large beast it is today. Upon driving the truck home to his home station based in Louisiana, he instantly began the transformation by building the engine. He added an SCT GTX Module for tuning, several engine upgrades from No Limit Fabrication, and an S&B cold air intake. He also added ATS Diesel differential and transmission covers along with Optima YellowTop batteries.

“The finished product looked good, but looking at it, I knew that I needed to go even more obnoxious,” he says. “I started doing some research online and ended up using some of my original McGaughy’s Suspension parts along with ordering some new parts from PMF Suspension to make my own 10-inch lift.”

The truck rides at that height with those components as it is now. Goose also installed a set of Bushwacker cut-out fender flares to clear larger tires and wheels that he since installed, which are Fury Country Hunter 40-inch M/Ts and 26-inch XF Offroad 207 wheels, respectively, and there were no issues with rubbing.

Digging Into The Aesthetics

Once Goose finished installing the lift, tires and wheels in the shop at his house, he started on the cosmetics. First things first, every truck needs a strong set of bumpers, so he went right to those.

“I had the opportunity to meet with the owner of Road Armor, and I was able to partner with them on a set of their front and rear Identity Series bumpers and Identity Series headache rack,” he says. “Now, we all know color matching is a must in this day and age, so my buddy at Black Sheep Powder Coating in Shreveport, La., took care of the powder coating for everything.”

We also know that bumpers and racks are a lot more meaningful with lights, so Goose partnered with FCKLightBars out of California, where they hooked him up with lots of lights. “The lights were enough to signal the Space Shuttle from outer space,” he laughs.

At this time, things were moving along nicely with Goose’s build, and the 2019 Daytona Truck Meet also happened to be around the corner. Buckin’ King had been to several local truck shows, parades and events, but it was now time to kick things up a notch. “Buckin’ King went to Daytona as a VIP vehicle,” Goose says.

In getting the truck ready for the show, he used products from several sponsors to build it up, such as a Conductor’s Special train horn from HornBlasters; custom taillights, a third brake light and emblems from Recon Truck Accessories; a 12-inch drop hitch from Gen-Y Hitch with BOLT Lock locking pins; and a Pro II 10-inch tower speaker set from ProBox Rocks. He also worked with a local company, SWB Wraps in Bossier City, La., and designed a tattered American flag theme wrap along with placing all the sponsored and partnered companies’ logos on the truck for the show. Once at Daytona, Buckin’ King was all cleaned up with Renegade Products detailing products and spent the first two days in the XF Offroad booth, then was on display in the Renegade Products Booth for the final day of the show.

“The event was awesome,” Goose says. “I was pulled over three times for using my horns and music in the wrong place and wrong time in the hours after the show, but they were all warnings!”

During the show, Goose saw some amazing builds and met some great people, and he highly recommends attending this event if you have the opportunity.

Since the 2019 Daytona Truck Meet, the truck has served as Goose’s daily driver. He makes frequent posts of the truck on his Instagram @buckin_crazy. He has previously used Buckin’ King to haul his old 40-foot gooseneck trailer, and he currently hauls a 30-foot car trailer. The truck has also been to several places around the U.S.

“I have actually driven it across the country,” he says. “I drove it all the way to California and around SoCal for almost six months while out there for some military flight training.”

Before he went to California, many people warned Goose that the American flag wrap on the side of Buckin’ King might not sit well with some people in California because of all the political divisiveness that exists these days.

“I told everyone not to worry. How could someone hate an American flag truck? I was wrong,” he says. “Just a few weeks after getting to California, I headed to the parking lot after a local event I was attending, to find that my entire truck had been keyed, primarily where the flag was. This blew my mind.”

Luckily, Goose’s insurance covered the vandalism and the entire truck was repainted while there. He then decided to take the American flag scheme off the truck, because he was still on orders in California by himself for four to five more months.

One major positive aspect came out of the experience, however, and that was being able to meet with RK Sports to acquire a cowl hood for the truck; he had it painted and installed at the same time. Once he got the truck back from the body shop, he had no more issues with anyone trying to vandalize it.

“I also became good friends with the body shop manager,” he says. In the last month Goose was out there, he ended up partnering with The Retrofit Source; he custom-built his own Morimoto Headlights and had that company do the paint work on the side.

Overall, through all the fun times and challenges, Buckin’ King has been an absolute blast for Goose to build and subsequently drive every day. From the Atlantic Ocean in Daytona Beach, to hanging out with the Lifted Outlaws in San Antonio, Texas, for a few months while on orders for training there, to Texas Motor Speedway north of Dallas, to the Pacific Ocean in Southern California, this is one truck that has seen and done it all.

“I built Buckin’ King to be one of a kind, ‘center of attention,’ and I enjoy driving it every day and everywhere,” Goose says. “I want to sincerely thank everyone who has been a part of this build.” 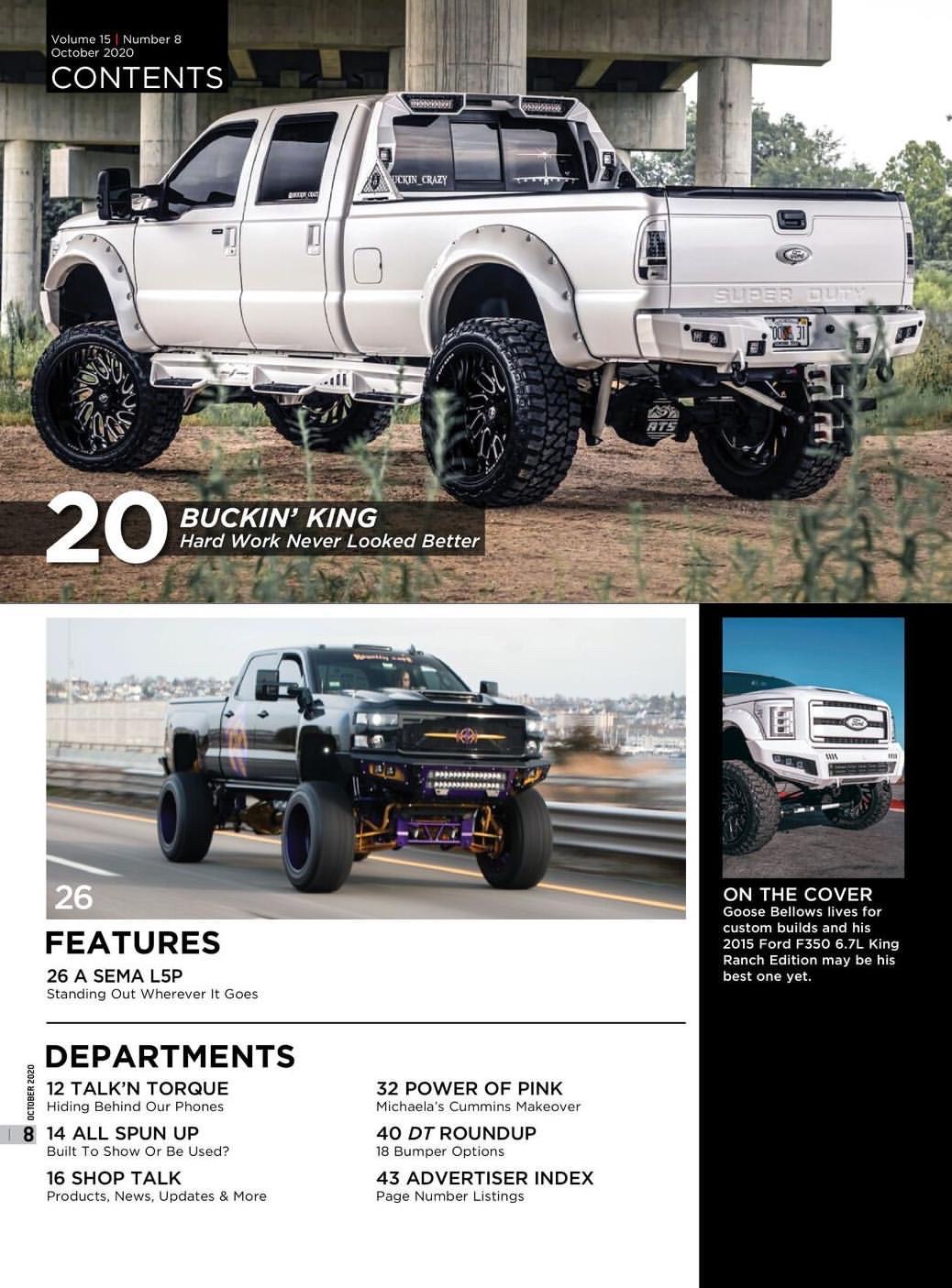 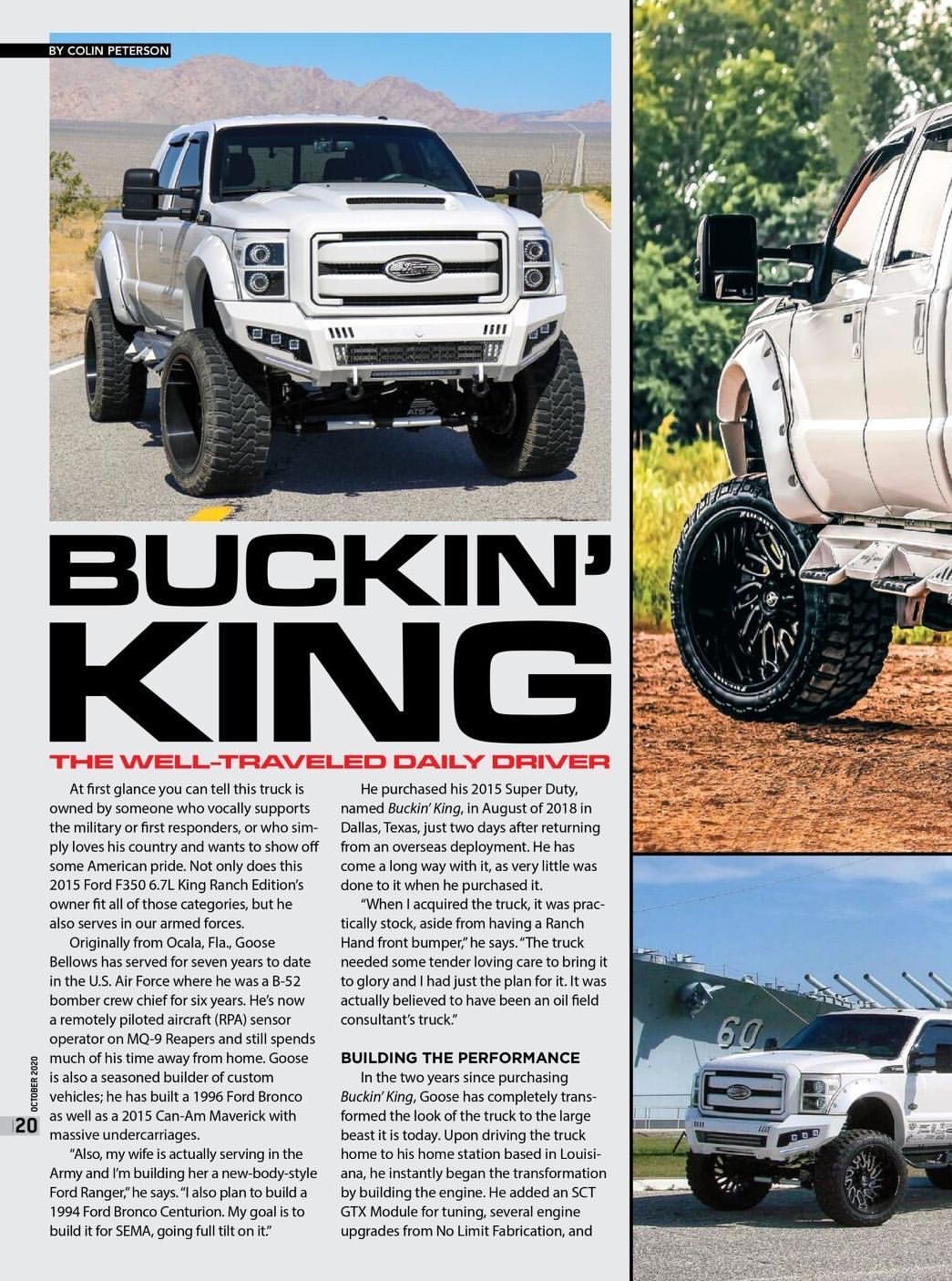 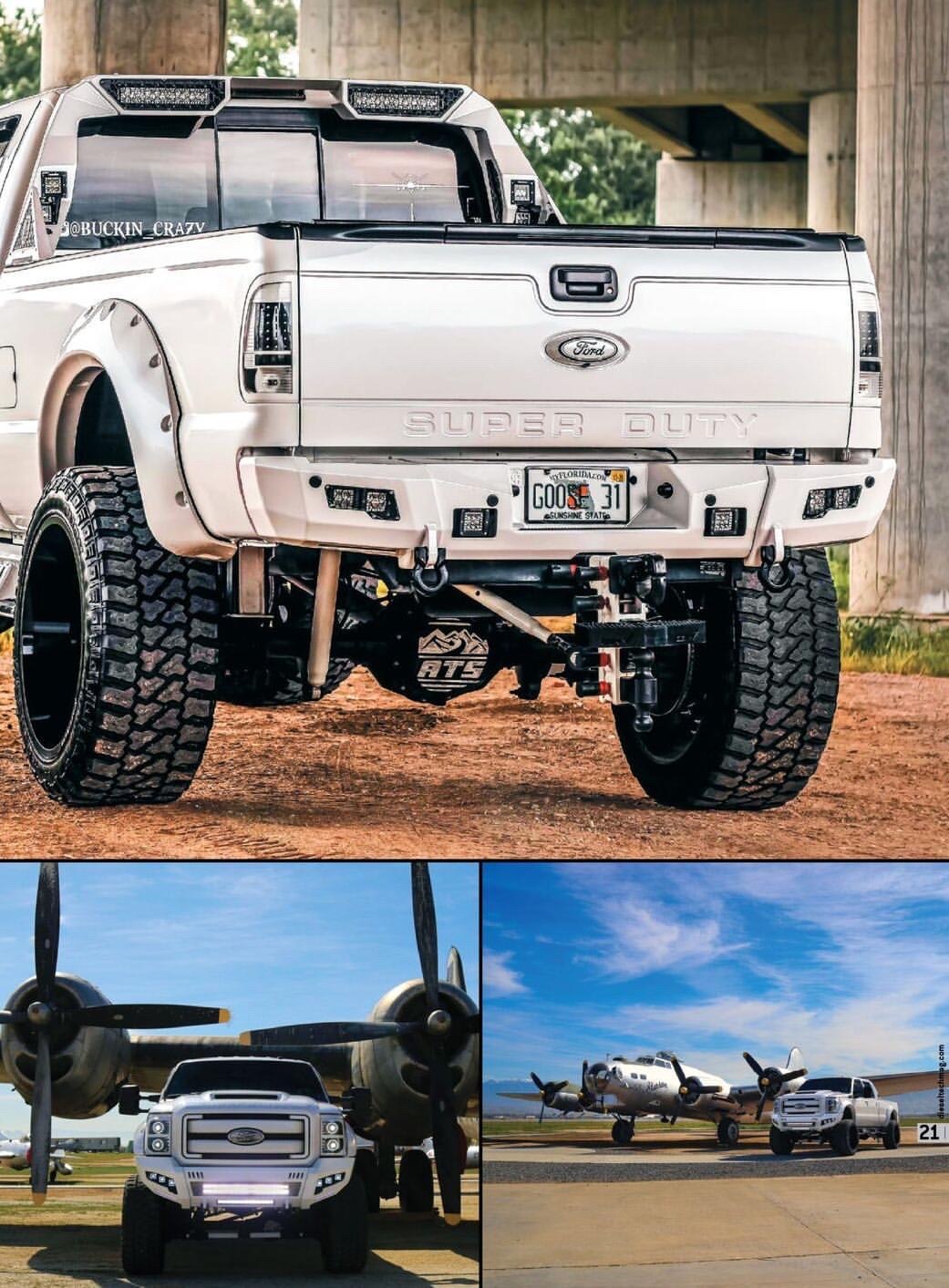 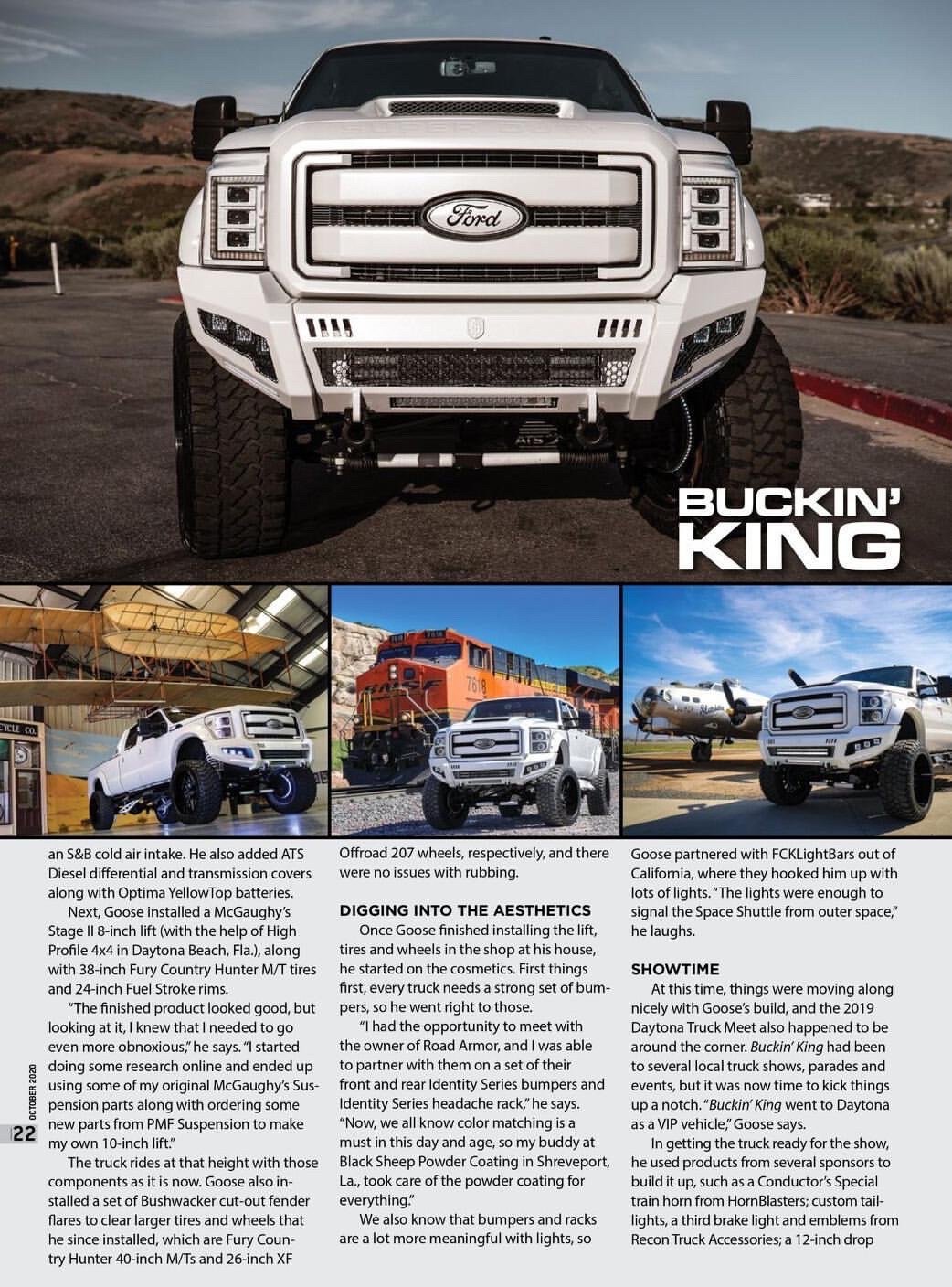 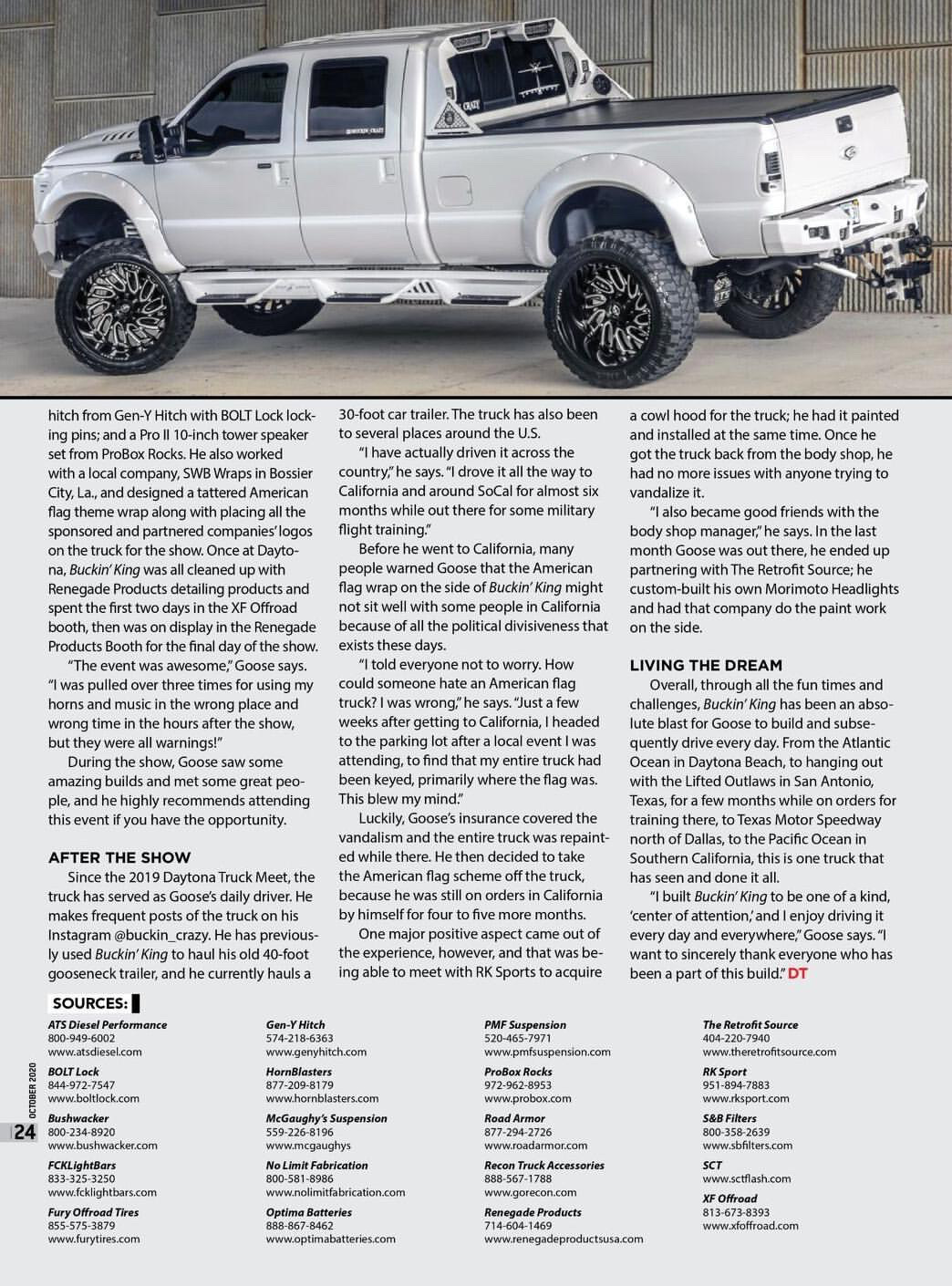